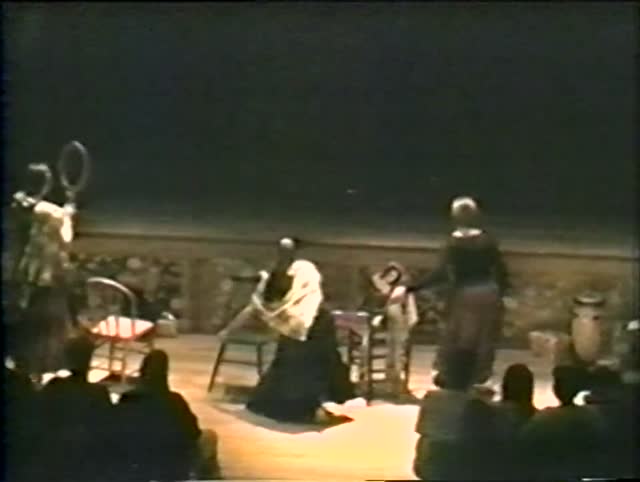 Summary: Video excerpts of "Son Corazón / Heartstrung", a theatrical tribute to actress and activist Myrna Vázquez, premiered at the Jorge Hernández Cultural Center in Villa Victoria, Boston, in July 1995, and later restaged at the U. of Amherst as a part of the New World Theatre in June 1996. The work, written and directed by former MIT artist-in-residence Rose Luisa Márquez, was researched and conceived in conjunction with the MIT Office of the Arts, IBA Arte y Cultura, Next Stage, Inc., and the Cambridge Multicultural Arts Center. This production was developed as a collaboration between Márquez, long-time collaborator Antonio Martorell, Assistant Professor of Theater Arts Brenda Cotto-Escalera, and professional performers Noelia Ortiz, Susan Thomson, Melinda López and Cati Lagniel. A bilingual, agile production, the piece pays homage to the outstanding theater, film, radio and television performances by Vázquez (born in Puerto Rico and "dying too soon" in Boston), as well as her commitment to social and political activism. The reenactment of some of her most memorable roles - with canonic Puerto Rican texts "La Carreta" and "La Pasión Según Antígona Pérez" - by means of objects, songs, coexisting languages and imaginative spatial articulations, reaches metatheatrical complexity while entrancing the audience with memories of "a heart that loved too much". Rosa Luisa Márquez (www.marquezmartorell.org) is a Puerto Rican theatre artist and pedagogue. Founding member of the theater group Anamú in 1971, she holds a masters degree from New York University and a Doctorate from Michigan State University; she specializes in contemporary theater. Rosa Luisa started her teaching career at the Theater department of the University of Puerto Rico in 1978. She developed the current curriculum of Drama Activities, which she teaches in her workshops at schools, prisons, rehab centers,