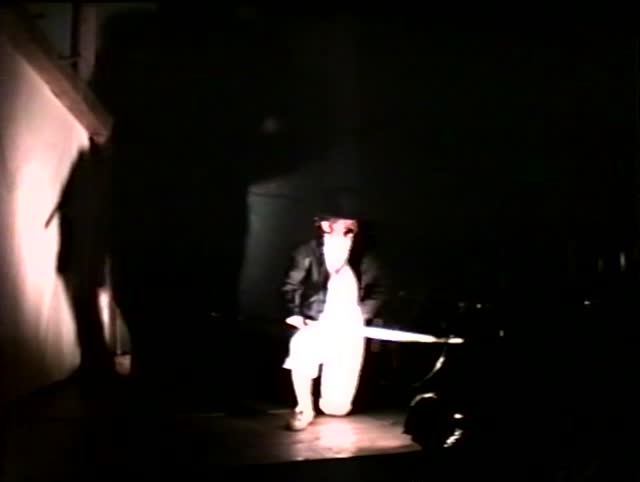 Summary: In this street/cabaret performance, La Chinga, a Mexican ensemble that explores popular archetypes present in the collective imagery, rooted in the tradition of XIX-century satiric lithography, turns the traditional theater genre of the 'pastorela' (Nativity play) on its head. The resulting 'partorela' (a pun for 'parto' or 'delivery,' 'birth,' 'enlightenment') presents La China (impersonation of Mexico City by Jesusa Rodríguez), about to give birth to 'El Niño' (a climate phenomenon? The Blessed Child?) at 'a hermeneutic and metaphysical crossroads': Mexico City's subway system. In a satiric reenactment and actualization of Mexican archetypes in the context of current sociopolitical events, La China's uterus is stolen in a convergence of police brutality, political corruption, the involvement of a militaristic Church, all wrapped in satiric, underdog picaresque. A heated debate arises on the baby's fate as characters El Maromero (the corrupted politician), El Cura (the corrupted Church) and El Pulque (Mexican folk inspiration and wisdom) each has in his power an element of China's 'extrauterine pregnancy': the uterus (stolen by El Maromero), the zygote (destined by El Cura to have a 'moral' delivery), and the shadow (or 'soul,' in the custody of El Pulque). In order to recover her pregnancy's constituting parts, La China has to get involved with the campaigns of candidates to the Secretary of Education, the Ministry of Culture, the Secretary of Treasury, and the Presidency in the upcoming Mexican elections. After recovering the parts, and with the aid of El Pulque, La China gives birth to El Niño (a big-headed baby), who in his 'intrauterine gibberish' -simultaneously translated by La China- asks the audience for petitions to be considered in his candidacy for the Presidency of Mexico. The Army, the Corrupted Politician and the

Summary: militarized Church, who had before manipulated, puppet-like, an effigy of President Ernesto Zedillo in a satiric song on military interventions in Chenhaló, Chiapas, end up crucifying El Niño, leaving open the question of what will happen in the next presidential elections. Mexican director, actress, playwright, performance artist, scenographer, entrepreneur, and social activist Jesusa Rodríguez has been called the most important woman of Mexico. Often referred to as a chameleon, Rodríguez moves seemingly effortlessly and with vigor across the spectrum of cultural forms, styles, and tones. Her espectáculos (as both spectacles and shows) challenge traditional classification, crossing with ease generic boundaries: from elite to popular to mass, from Greek tragedy to cabaret, from pre-Columbian indigenous to opera, from revue, sketch and carpa, to performative acts within political projects. Humor, satire, linguistic play, and the body are constants in her productions. She seeks to render corporal and, thus, visible, the tensions between the discourses in operation on and through the individual and collective body. Rodriguez's energy is intense and her commitment non-negotiable, always interrogating the nature, site, and consequences of power and its representation. Liliana Felipe, one of Latin America's foremost singers and composers, was born in Argentina in the 1950s. She left for Mexico just before the outbreak of the 'Dirty War' (1976), but her sister and brother-in-law were both 'disappeared'--victims of the military dictatorship's criminal politics. Liliana's music has a wide following in Latin America. She continues to be a powerful presence in Argentina, working with human rights organizations--especially H.I.J.O.S. (the organization of the children of the disappeared). In Mexico, Liliana went to one of Jesusa Rodríguez's

Summary: performances. Jesusa, catching a glimpse of Felipe in the audience, remembers saying to herself: I am going to die with that woman. Since then, Liliana and Jesusa have created two performance spaces, El Cuervo and later El Hábito in Coyoacán, Mexico City, that they still run. They 'married' in February 2000. El Hábito (www.elhabito.com.mx) is a hotbed for intellectuals, feminists, gay rights activists and open-minded, progressive people who want to be engaged by a smart and critical humor. In this off-off space, and with the collaboration of their theater cooperative Las Divas, Jesusa y Liliana have produced hundreds of shows since the 1980s.