This Pleasant and Grateful Asylum : Performance and Rehearsal. 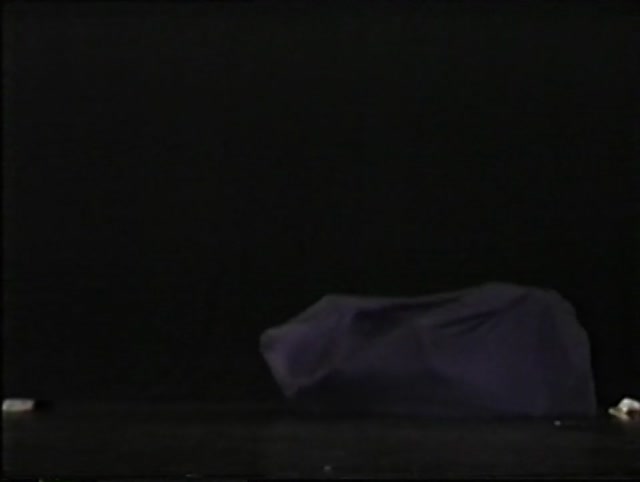 Summary: This Pleasant and Grateful Asylum was created for and premiered at the Martha @ Mother series, presented by Richard Move and Janet Stapleton March 3-5, 1999. The dance was inspired by Bill T. Jones' encouragement to challenge suppression, oppression, and repression and is the second of a 4 part work called Things Which Transect Our Vision. The piece is a duet with Arthur's partner and collaborator Charles Rice-González. As the fabric moves and unravels, the foundation of their own love and intimacy comes up, disguised as choreography, to create a fissure in the narratives of loneliness, grief and death in the racist and homophobic discourse of the 1980s and early 1990s through the gorgeous strength of racialized male partnership. Nude and joined by their mouths, they come out and fly away together.

Summary: Arthur Avilés is a queer Puerto Rican dancer/choreographer based in the Bronx, New York. Avilés was a member of the Bill T. Jones/Arnie Zane Dance Company from 1987 to 1995. He later formed Arthur Avilés Typical Theatre, a dance company based in the Bronx that seeks to create work that plays on the margins of gay and Latino cultures. The company is housed at the Bronx Academy of Arts and Dance (BAAD!), which was founded in 1998 by Avilés and Charles Rice-González, a creative writer and community activist. Avilés' work utilizes aspects of theater and dance, often taking the structure of stories from existing classics and reconfiguring them in order to express the felt, actual, and fantastical lives of queer Latinos living in the ghetto. He received a Bachelors of Arts in Theater/Dance from Bard College under the direction of Jean Churchill, Lenore Latimer, Albert Reid, Susan Osberg, and Aileen Passloff. He was awarded an honorary doctorate from his alma mater in 2015.

Summary: Charles Rice-González is a writer, long-time Bronx LGBT activist, co-founder of BAAD! The Bronx Academy of Arts and Dance and a Distinguished Lecturer at Hostos Community College - CUNY. His debut novel, Chulito (Magnus 2011), has received awards and recognitions from American Library Association (ALA) and the National Book Critics Circle. He's the chair of the board for The Bronx Council on the Arts and The National Association of Latino Arts and Cultures.