New works for a new world [videorecording] : excerpts from 'The Bodies Between Us,' 'Chicomoztoc/Mimixcoa: Cloud Serpents,' and 'The Return of Elijah, The African' 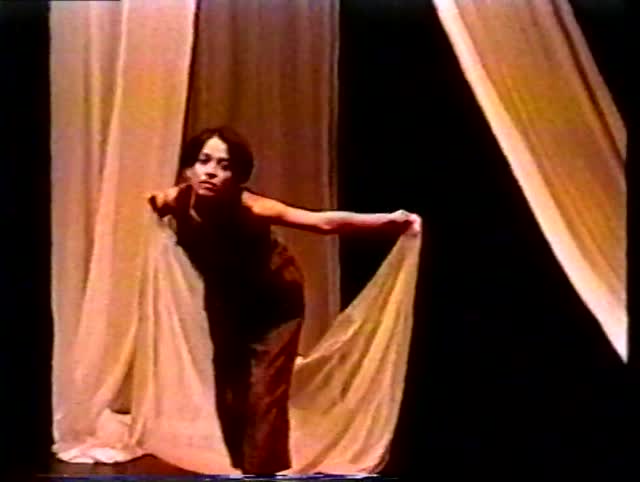 Summary: ‘New Works For a New World’ includes video excerpts of three plays featured by New WORLD Theater’s summer playlab program in 1996. ‘The Bodies Between Us,’ a solo performance by lê thị diem thúy, explores the politics of ‘mixed race’ and generational links through the female body. The piece is a reflection upon relationships with a tradition and racial and ethnic backgrounds as the legacy inherited from ancestors, and what would be given, in turn, to future generations born in the wake of diasporic and migration movements. ‘Chicomoztoc/Mimixcoa: Cloud Serpents,’ by Elvira Colorado and Hortencia Colorado, from Coatlicue Theater Company, is a work-in-progress that discusses the metaphorical relationship between railroad tracks and a family history marked by migration. ‘Las Colorado’ explain the piece as being ‘a journey through dreams, stories, time and memory, across mountains and deserts, retracing the footsteps of the ancestors, traveling back to Chicomoztoc (the place of our origin), searching, digging up and gathering stories that have been buried through centuries of shame and denial in our family, but which connect us to our past and identity. Some stories/secrets remain buried, and they are also part of who we are.’ ‘The Return of Elijah, The African,’ by Sekou Sundiata, interweaves spoken word with jazz singers and band. Music and poetry recount together the origins of slavery, as well as the evils of master-slave dynamics of oppression. ‘New Works For a New World’ constitutes a complex canvas that encompasses the power of diverse languages: the language of the body, the language in translation, the language of music, and the transformative sound of meaningful voices.

Summary: From 1979-2009, the New WORLD Theater worked at the intersection of artistic practice, community engagement, scholarship, and activism toward a vision of a ‘new world’—one that broke the confines of multiculturalism and was an artistic harbinger of America’s shifting demographics. From a geographic ‘outpost’ in New England, New WORLD Theater evolved from a community organizing project and the Northeast point on a theater touring compass, to a protective studio to hone new work, a site of international intersections from South Africa to the South Bronx, and the home of inspired and rigorous collaborations with Western Massachusetts youth. New performance work development at New WORLD defied the conventional theater play lab as ghetto for artists of color; artists were met where they wanted to be in the imagining of new approaches, methods, and production.