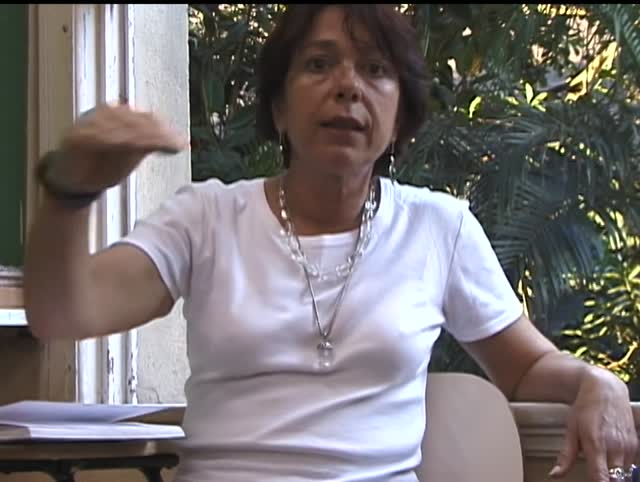 Summary: Interview with Teresa Ralli, founding member of Grupo Cultural Yuyahckani, conducted by Diana Taylor in the context of the first Encuentro of the Hemispheric Institute of Performance and Politics, held at Rio de Janeiro, Brazil in 2000. Ralli discusses the role of women in Yuyachkani in the context of issues of politics and gender in Peru. Topics covered include womens role in society, the difficulty of making a living as professional female theater practitioners, and how the women artists work with Yuyachkani provides them with a space for self-reflection about these roles and also the space to play with/challenge them. For the artist, theater has been a space for personal growth, aesthetic exploration, and social intervention. Teresa talks about the interplay between Yuyachkanis workshops with Peruvian women (dealing with issues of sensibility, bodily awareness, and memory), their theater performances, and their political activism in Peru, both in terms of the internal workings of Yuyachkani and with their audience. She comments on the Encuentro Nacional de Actrices (a conference/event that brought together various Peruvian female performers of Peru), the celebration of the Primer Festival Teatro Mujer (the first major theater festival by women in Peru), the creative and political environment surrounding the creation of Yuyachkanis all-women piece La primera cena (directed by Ralli), and the role Peruvian women play in the creation and performance of her one-woman piece Antígona. Perus most important theater collective, Grupo Cultural Yuyachkani has been working since 1971 at the forefront of theatrical experimentation, political performance, and collective creation. The theater group has devoted itself to the collective exploration of embodied social memory, particularly in relation to questions of ethnicity, violence, and memory in

Summary: Peru, with a strong commitment to grass-roots community issues, mobilization, and advocacy.