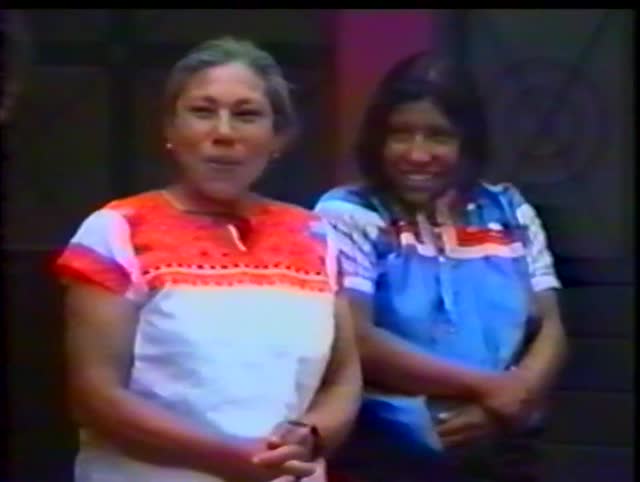 Summary: Coatlicue Theater Company produced a three-minute video demonstrating their storytelling/playwriting/theater workshops. Included in the footage are clips from a workshop held in Chiapas, Mexico. The companys workshops are divided into three parts. The first part is aimed at getting participants to open up to one another to begin to work collectively. Its devoted to exercising the body through sounds and movement to stimulate the imagination and awaken the body, mind, and spirit. The second part is designed to teach storytelling and involves exercises that develop trust, listening, and communication skills. Here the Colorado sisters demonstrate the different ways to tell a story, how to work together to tell a story, and listening to others tell a story. Participants are then taught how to incorporate their earlier exercises into the storytelling process and work on developing a theater piece. Elvira and Hortencia Colorado, Chichimec Otomi storytellers, playwrights, performers and community activists are founding members of Coatlicue Theatre Company (www.coatlicue.com). They are also members of Danza Mexica Cetiliztli, New York Zapatistas and the American Indian Community House. The company's plays address social, political, cultural and identity issues that impact their lives and their community. Their work is based on stories they weave together which educate as well as entertain, while reaffirming their survival as urban Native American women. They have conducted storytelling/ theater workshops. They are recipients of the Ingrid Washinawatok Community Activism Award. The American Indian Community House (AICH) is an urban Indian center that services the needs of the Native people living in New York City and welcomes Native visitors to the city. AICH was founded in 1969 and has become a de facto neighborhood serving as a meeting place

Summary: for the diverse Native community of the New York City area. The Community House offers a variety of services ranging from substance abuse and HIV counseling, to career assistance. It is also home to the only Indian owned and operated art gallery in New York City. The AICHs Performing Arts Department has become an important resource for Native visual and performance artists. Through its programming, performance has become an important educational vehicle, both for the Native and non-Native NY community. The Badger's Corner, initiated in the 1980s, is an education-via-entertainment vehicle for the AICHs visual and performing arts department programs. Taking its name from the Pueblo legend of the four-legged creature who led the Pueblo people out of the underworld after the great flood, the intent of its programming is to inform and challenge people to rethink their concept(s) of Native American people and customs. All performances at AICH are presented under the auspices of the Badgers Corner.