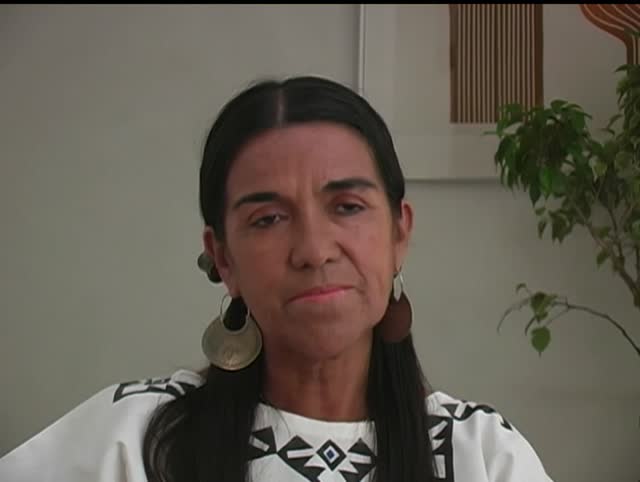 Summary: Luisa Calcumil is a Mapuche actress, director and playwright from the South of Argentina (Patagonia). She began her career as an actress in 1975. After performing in twenty plays, five films and various television programs, she felt she was not represented in the roles she played. So she decided to write her own scripts: 'Hebras' and 'Es bueno mirarse en la propia sombra.' In this interview, conducted by Diana Taylor at the Hemispheric Institutes 5th Encuentro (Belo Horizonte, Brazil, 2005), Luisa begins by introducing herself in Mapudungún (her indigenous language), saying, 'I am a person of the land, the land down south that our dear ancestors called Cold Swamp but is now known as General Roca With the protection of the Great Mother of the Sky, the Great Father of the Sky, the Young Woman and the Young Man of the Sky I have been able to arrive here today.' She tells the story of her difficult childhood and how she came to the world of theater. She also discusses her solo performance, 'Es bueno mirarse en la propia sombra' ('Its Good to See Ourselves in Our Own Shadow'), which she presented at the Encuentro. Through her work, she wishes to transmit the Mapuche worldview, which she says is different from that of 'the white world', being mainly oral and musical. She wants to break with stereotypes of indigenous peoples, who have been so widely represented by others; she calls for self-representation, respect for traditions and the renewal of hope for her community.