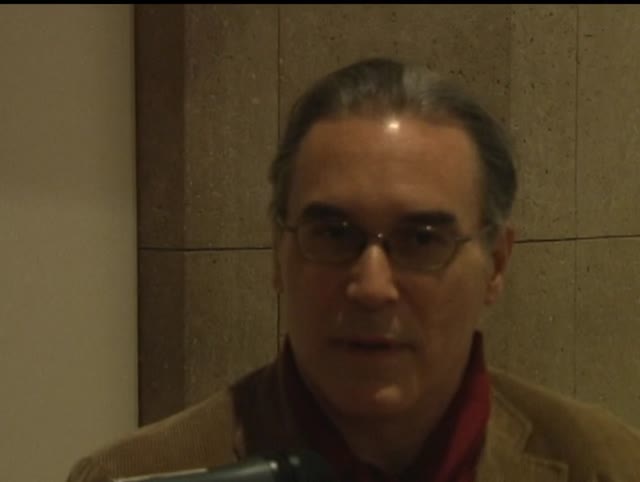 Summary: Shortly after the opening of his show, 'Revealing the Absent Indian,' part of the 'New Tribes New York' series at the National Museum of the American Indian, Alan Michelson talks about the exhibit, which is a retrospective of his work. Much of his art has been informed by the fact that his was adopted out (Native people were adopted out in alarming rates in the 1940's through the 1970's) and only met his Mohawk family later in life. Michelson frames this issue within the larger subject of Native displacement. Another theme of his work is the landscape, which the artist uses to challenge the notions of supremacy and superiority. One of the pieces Alan concentrates on, 'Two Row II,' is a video installation which references the Two Row Wampum Belt that symbolizes the agreement under which the Iroquois/Haudenosaunee (the Six nations confederacy which Mohawk are a part of) welcomed the white peoples to their lands: 'We will NOT be like father and son, but like brothers. These TWO ROWS will symbolize vessels, traveling down the same river together. One will be for the Original People, their laws, their customs, and the other for the European people and their laws and customs. We will each travel the river together, but each in our own boat. And neither of us will try to steer the other's vessel.' The Haudenosaunee has kept the agreement to this date. Alan's artwork is also in the film and his show can be seen at http://www.nmai.si.edu/exhibitions/newtribe/.