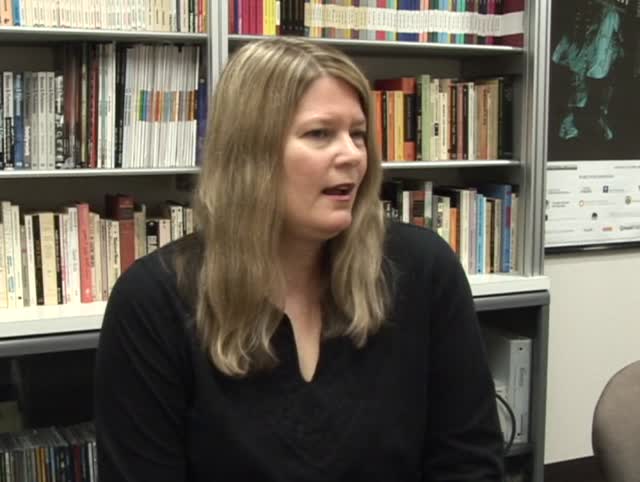 Summary: In November 2008, The Public Theater in New York City was proud to present a festival of extraordinary theater from today's Native artists. In its second year, the festival featured: three free readings of new works by Native playwrights Victoria Nalani Kneubuhl, Laura Shamas, and Eric Gansworth followed by post-show discussions; a discussion with Artistic Director Oskar Eustis and a panel of Native artists on Politics and Performance that was open to the general public; a series of seven Field Discussions designed to convene artists and create an open forum to address and discuss issues facing Native Theater today; and a concert in Joe's Pub by Native and African-American singer Martha Redbone. This video, Interview with Laura Shamas, supplements the 2008 festival records, as a part of an interview series conducted by Tom Pearson.

Summary: Laura Shamas' (Chickasaw) work has been read/developed/presented at many theaters, including Native Voices at the Autry, Native Earth Performing Arts, 'Playwrights Week at the Lark,' Soho Theatre, Williamstown Theatre Festival, The Old Globe, The Geva Theater, and The Utah Shakespearean Festival. Shamas has several published plays, including 'Re-Sourcing,' 'Moliere In Love,' 'Pistachio Stories,' 'Up To Date,' 'Lady-Like,' 'Picnic at Hanging Rock,' 'Portrait of a Nude,' and 'The Other Shakespeare.' She has been honored with a number of playwriting awards, including the 2008 Garrard Best Play Award from the Five Civilized Tribes Museum, a Fringe First Award for Outstanding New Drama (Edinburgh), a Drama-Logue Award, and a 2006-2007 Aurand Harris Fellowship from the Children's Theater Foundation of America. Tom Pearson (Creek/Eastern Band Cherokee) is a writer and artist working in a variety of media that includes contemporary dance, site-specific performance, film, visual art, and large-scale installations. Pearson received his MA in Performance Studies from New York University/Tisch School of the Arts and is currently the Co-Artistic Director of Third Rail Projects, a collective of artists based in New York City. He is the recipient of a 2008 New York Dance and Performance (Bessie) Award for choreography and a Kingsbury Award for writing. Pearson's articles on Native dance and performance have been published in Time Out New York Kids, Dance Magazine, Dance Spirit, and several online publications. In addition to his work in the contemporary arts, Tom also participates in traditional American Indian events as a dancer and singer.