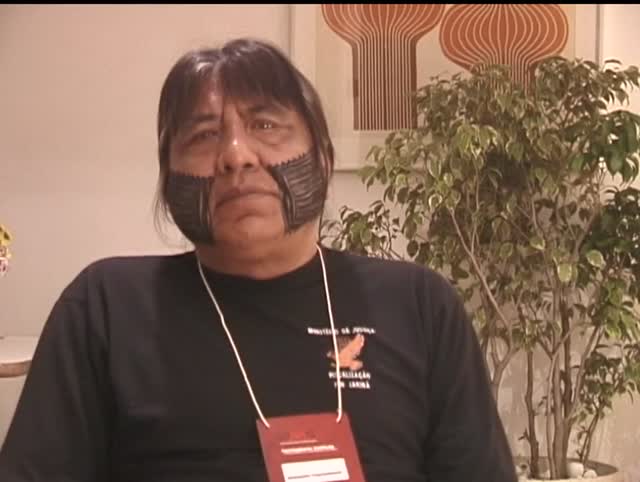 Summary: Megaron Txucaramãe, (leader of the Mebêngôkre/Kaiapó) is one of the most important native leaders in Brazil, with outstanding performance on behalf of his people, Mekragnotire, and of other Brazilian native people. Working at Funai, he acted in Contact Fronts of the Ikpeng and Panará People. In 1984 he took part in the setting of the land boundaries of the Native Land Kapôt - Jarina and, in 1992/1993, of the Native Land Mekragnotire. He was a FUNAI supervisor of the Parque Indígena do Xingu (Xingu Indians Park) from 1984 to 1994 and has been the director of Funai - Colíder/MT since 1995. He is also a founder member of the Associação Ipren-re de Defesa do Povo Mebêngôkre (Ipren-re Association for the Mebêngôkre People) since 1993. In this interview, conducted at the Hemispheric Institute's 5th Encuentro (Belo Horizonte, Brazil, 2005, http://hemi.nyu.edu/eng/seminar/brazil2005), he talks about Kaiapó cultural practices and traditions, as well as their current situation in contemporary Brazilian geopolitics. He also comments on his people's participation in the Encuentro, titled 'Performing Heritage: Contemporary Indigenous and Community-Based Practices', where Megaron also delivered a keynote address titled 'The Indigenous Question in Brazil.'