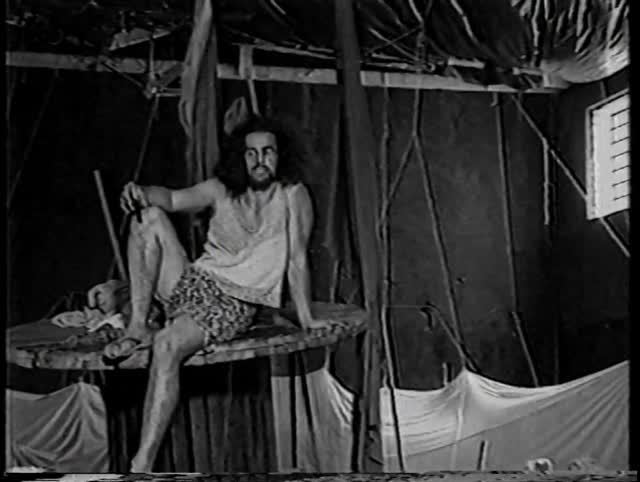 Summary: In Ostal the audience of only twenty people is guided through a dark tunnel by a doctor, one by one, to the room of a patient, nearly completely occupied by an enormous bed. Once the last audience member enters, the doctor locks the door behind them. The performance takes place in this closed room, fragments from the life of a women tormented by mental illness. Her schizophrenia is portrayed not as a clinical disease, but as an inevitable consequence of the process of social adaptation we are all submitted to since childhood. In search for her identity, she seeks complicity from the audience, while all sorts of strange and violent things happen to her and to the room, without one word being said.

Summary: Based in Porto Alegre, The Tribo de Atuadores Ói Nóis Aqui Traveiz was born in 1978 out of a desire for a radical renovation of the language of theatre. During the several years of their existence, they have created a personal aesthetics founded upon the authorial work of the actor, both on the stage and on the streets. Their venue, the Terreira da Tribo de Atuadores Ói Nóis Aqui Traveiz, works as a community theatre school, offering several free workshops open to the public. Their tribal organization is based on the principle of collective work, both in the creative process and in the maintenance of the space. For Ói Nóis Aqui Traveiz, theater is an instrument for both revealing and analyzing reality, and it's function is social: to contribute to the collective knowledge and to the improvement of the quality of life of the people. In a world marked by exclusion, marginalization, homogenization, by dehumanizing and barbaric efforts, they see it as their moral imperative to denounce injustice, sold opinions, authoritarianism, mediocrity and the erasing of memory. Ói Nóis sees theatre as an art of resistance, in the service of arts and politics, an art that does not fit the market patterns for ethics and aesthetics. Instead, they see theater as a way of life and as a vehicle for ideas: a theater that does not comment on life, but that takes part in it.