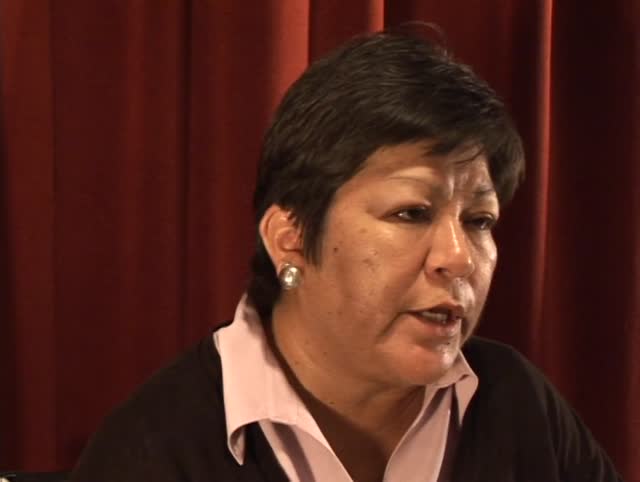 Summary: In December of 2007, as part of its Native Theater Festival, the Public Theater brought Native theater professionals from around the U.S. and Canada to New York City for a series of readings and discussions. The five-day festival included play readings, post-performance discussions, concerts, roundtables, and the performance of Darrell Dennis' 'Tales of and Urban Indian.' This video documents an interview with Terry Gomez, conducted by Edward Wemytewa as a part of a supplementary Native Theater Festival interview series.

Summary: Terry Gomez is from the Comanche Nation of Oklahoma. She is a published and produced playwright, published writer, theater director, actor and painter. Her play 'Inter-tribal' was produced as a staged reading at The Public Theater in New York City and published in the anthology 'Plays by Women of Color.' Other plays produced in various New Mexico venues include 'Inter-tribal,' 'Reunion,' 'The Antigone,' 'A Day at the Night Hawk,' 'Carbon Black,' 'Rain Dance,' 'Melanin,' and 'The Woman with a Mustache.' Terry has been an adjunct professor of theater arts at the Institute of American Indian Arts in Santa Fe, New Mexico, and faculty for the I.A.I.A./ABC/Disney Summer Film Program. She has directed seven original plays and two showcases for the I.A.I.A. and 'Ghost Dance' by Annette Arkeketa. She has also taught workshops for the Santa Clara Pueblo Community School, Tesuque Pueblo Language Program, and the Crown Point Community School, as well as giving workshops at the International Workshop Festival in London, England. She is a recipient of the 2007-2008 American Indian College Fund/Andrew W. Mellon Fellowship. Recent acting stints include a month-long tour of New Mexico with the theater troupe Wise Fool in the play 'Baggage.' She is the mother of two and currently resides in Santa Fe. Edward Wemytewa is a former Zuni Tribal Councilman, and his connection to his Zuni cultural heritage is through art and language. He is the founding director of Idiwanan An Chawe, a storytelling theater. A playwright, performer, and visual artist, Edward's prize-winning paintings and sculptures have been exhibited in museums in Arizona and New Mexico.