Double agency [videorecording] : Miss Risqué & It's a small house and we've lived in it always 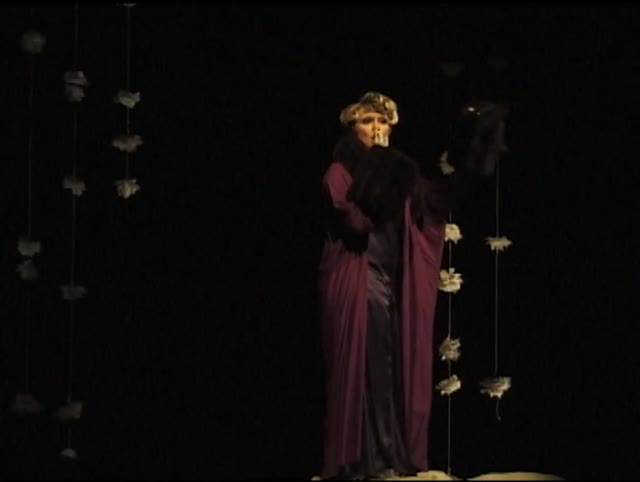 Summary: Since 1981, the Split Britches Company (founded by Lois Weaver, Peggy Shaw, and Deb Margolin, www.splitbritches.com) has written and performed in trio, duet, and solo, as well as collaborated and performed with other artists. They describe their work in this way: 'Our work is rooted in popular culture, but positioned against it. It relies on moments rather than plot, relationships rather than story. It depends on the surprise of transformation rather than the logic of psychological narrative. It straddles the line between performance and theater, exploiting theatricality while exposing the pretense. It is about a community of outsiders, queers, eccentrics. It is feminist because it encourages the imaginative potential in everyone and lesbian because it takes the presence of lesbian on stage as a given.' Their vaudevillian satirical gender-bending performances have received numerous awards, including a Jane Chamber award and four Village Voice OBIE awards.

Summary: Their collection of scripts, 'Split Britches Feminist Performance/Lesbian Practice', edited by Sue Ellen Case, won the 1997 Lambda Literary Award for Drama. These two videos document the NY premieres of the shows 'Miss Risqué' and 'It's A Small House and We've Lived in It Always', performed at La Mama, in the context of the two-piece spectacle show 'Double Agency', the first collaboration between Split Britches and the renowned English troupe The Clod Ensemble. The first video in this set documents their piece 'Miss Risqué', a story of secrets and showgirls, set in turn-of-the-century Paris, where working-class girls could become rich and famous, prostitutes could pass for nobility, women could have open affairs with women, and sex wasn't exclusive to the marital bed. A piece on 'resistant femininity', 'Miss Risqué' is a lyrical lesbian tarantella that explores the power of femininity, visibility, invisibility and deception.

Summary: It was commissioned by the Nuffield Theatre, Lancaster University and supported by the National Lottery through the Arts Council of England, the London Arts Board, and Queen Mary, University of London. The second video in this set documents their piece Its a Small House and We've Lived in it Always. In it, two explorers lay claim to the same territory. With three chairs as its only props, little speech, some song and much meaningful movement and expressive acting, the piece shows longtime cohabitants engaged in a contest for space. These people have known each other for a long time. They occupy a house the size of a small stage, a house divided and subdivided by time and bad habits. They sit on the porch, watch the horizon, and wait for the weather to change. Their only hope is an audience.

Summary: As they move apart and then together, spurn advances and accept closeness, mime rejection and flirtation and reveal need, the two performers enact the ebb and flow of a universally resonant relationship. This work was first commissioned by the South Bank Center as part of the British Festival of Visual Theatre.